How To Come Back From Your Great Resignation 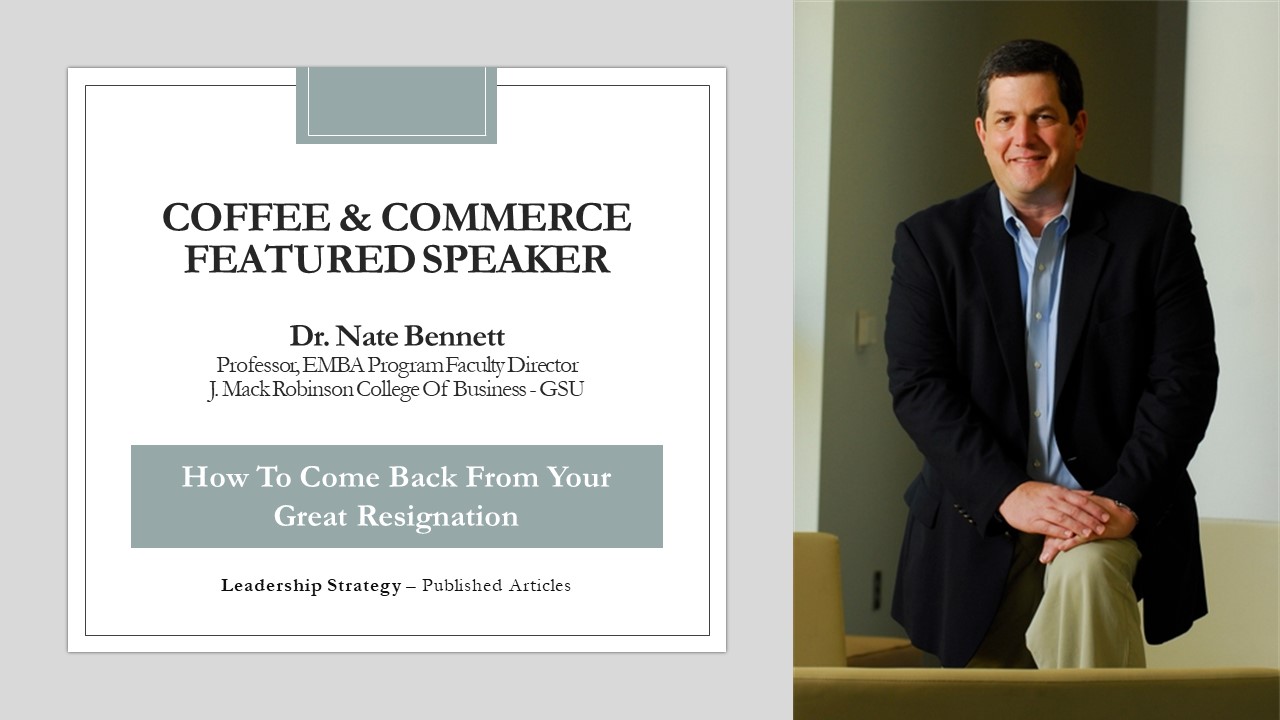 A remarkable consequence of the pandemic has been its triggering of the ‘great resignation.’ People have been voluntarily leaving jobs for many months now at a never-before-seen rate. Some of these departures are earlier than expected retirements; early in the pandemic, rising housing prices and stock market performance created a sense of financial security among many who had planned to work for a few more years. The wealthy feeling and the misery of sorting out work during the pandemic made it easy for many to go ahead and exit the workforce. For others, a sense that life was too short to suffer the indignities thrust upon them by their employer made taking a break the more palatable choice. For still others, the resignation was better thought of as a reprioritization – quitting an employer was simply the first step toward a job that provided greater meaning. For these latter two groups of workers, the theme that underlies the decision to quit is a feeling of under appreciation – whether based on low pay, poor benefits, or mistreatment from supervisors.

This trend shouldn’t be expected to end any time soon. For the most part, observers have focused on the steps employers need to take to restore a sense of excitement about the future provided by a job with their company. Certainly, employers are well-advised to have a heightened sensitivity to the way the jobs they offer are perceived by potential employees. Those who are unable to offer a compelling future-oriented employee value proposition shouldn’t be surprised if they continue to struggle to be properly staffed.

An issue that hasn’t received the same attention regards the way a decision to step out of the labor market during these tough times might impact the career strategies of those ‘resigners’ who will, at some point, need to reenter the workforce. The same may turn out to be true for early retirees. Turmoil in the financial markets or bursting of a housing bubble might reveal their optimism about early retirement was misplaced. In all three cases, how will their decision to reject poor treatment or to reprioritize their life goals influence their ability to later find employment that better suits their life goals? In the end, everyone who participated in the great resignation would be well-advised to spend some time today thinking strategically about what impact that move – dropping out – has on their career strategy.

The most significant challenge people will face as they plot their return to work is to fully understand how the workplace has changed. The pandemic isn’t done with us yet; employers are still experimenting with what employment looks like now and what it might look like in the future. Indeed, the nature and content of many jobs have already changed - and we should anticipate more change. What new tools, skills, and disciplines will you need to demonstrate to a potential employer? How, since you have exited the workforce for now, will you develop and master them?

An applicant’s job is to help an employer understand how low a risk they pose as a newcomer. Doing so is tough when the exact nature of the position is unfamiliar. Just as one evident example, the increasingly desired remote work assignment requires a deeper level of trust. How does an outsider unfamiliar to the hiring manager adequately support a claim of being trustworthy? How do you demonstrate you will require little supervision when you stepped out of the workforce before such arrangements became de rigueur?

Taking the remote work example further reveals a second way career strategy needs consideration. To the degree that an applicant’s commute from home to work becomes as simple as closing a home office door and going online, the geographic range for potential jobs vastly increases. It’s essentially a guarantee that the places you could next be employed far outreach the range of your professional network. Those who plan to come back and want to be competitive in a broader geographic region must invest time now in growing the geographic reach of their professional network. The best way to do this is to identify opportunities to create weak ties.

The distinction between weak and strong ties has been recognized for some time. Strong ties are those shared with someone you connect with on multiple levels. You have a strong tie with the person from your hometown with whom you played a sport during high school, who attended your same college, joined your sorority, shared your major, and married your sibling. Weak ties are those that describe someone who is an acquaintance. Perhaps you met them at a professional meeting, occasionally share an elevator in the condominium building where you each live, or wave at each other while attending the Little League baseball games your children each play.

From a career standpoint, weak ties are particularly advantageous because your network is likely entirely redundant with individuals with whom you share strong ties. Your weak ties are the people best positioned to introduce you to others you do not know. If you want to test this out, look at the LinkedIn page of someone to whom you feel strongly connected. Compare the number of mutual connections the page reports with the number that results from your visit to the page of someone you have a much more tangential relationship with. What better way to spend newfound time during the great resignation than to create weak ties that adequately cover the larger geographic area in which your next career opportunity might appear?

For many, employment arrangements will be different in the foreseeable future. To think that the ways you present yourself to a potential employer won’t need to change is untenable. To be comfortable with the reach and effectiveness of your current professional network is naïve. Time invested in building a value proposition that compels an employer to give you a chance to thrive in the new world of employment is undeniably time well spent.

Never miss a beat on what’s happening next in Alpharetta.

Thanks for joining our newsletter.
Oops! Something went wrong.